The Economist magazine is by far one of the most influential global establishment publications. Its editorials should be considered a good representation of what is on the mind of the powers that be (or at least what can be divulged). They recently chimed in on the subject of “counter terrorism” as the attacks in Paris were sweeping through the policy circles across Europe and several other parts of the world. The future security policies, updated laws, changes to personal freedoms, wars, etc. may be driven by the views presented here. How will our world deal with security versus freedom? Can we fix this problem by spying on everyone? Carrot or stick? Time will tell but the Economist’s views and opinions on this matter should be of some concern to the average citizen and worth keeping track. 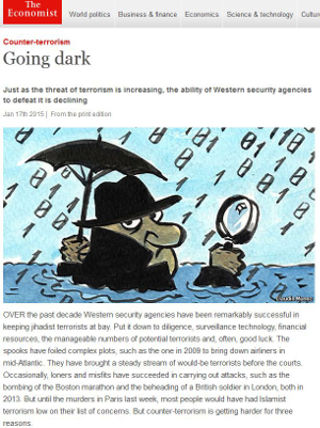 “This week, the head of the European police agency estimated that up to 5,000 European Union citizens had joined the jihadists’ ranks, many of whom would return home as hardened fighters. Furthermore, the ascendancy of IS has presented a challenge to al-Qaeda. The brothers who carried out the Charlie Hebdo murders appear to have been operating under orders from the Yemen branch of the terrorist network, Al-Qaeda in the Arabian Peninsula, well-known for wanting to take the fight to the “far enemy” in the West.

The second is that commando-style assaults, such as the one in Paris, are easy to plan and thus hard to disrupt. They may not kill as many people as blowing up an aircraft, but the “propaganda of the deed” is achieved by paralysing ordinary life in a big city and dominating 24-hour news channels. Third, Western spooks say they are losing the technological edge that has enabled them to monitor the communications of potential terrorists.”  (The Economist)