Garland, Texas hosted an exhibition on May 3rd where caricatures of the Prophet Mohammad were on display. Two heavily armed men attempted to attack the Curtis Culwell community center but were killed by a police officer guarding the perimeter of the location. The two terrorist roommates were from Phoenix, Arizona – American Muslim convert Elton Simpson and Pakistani-American Nadir Soofi – and proclaimed loyalty to the Islamic State (IS/ISIS). The fact that two heavily armed terrorists were brought down by a pistol toting Texas cop is either extremely good luck or a testament to law enforcement training. These two terrorists have since been embraced by ISIS as “soldiers of the caliphate” and the terrorist group has promised worse attacks to come. 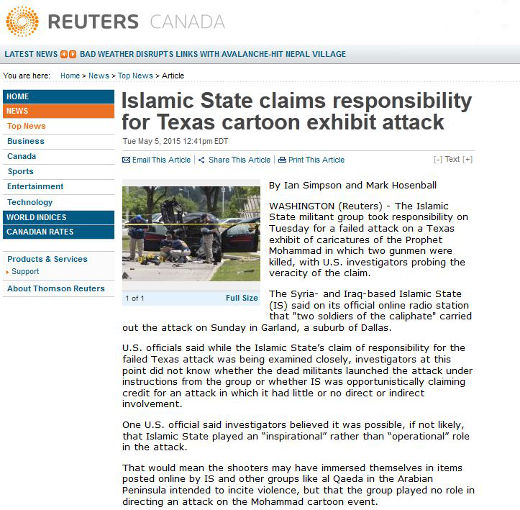 Authorities said roommates Elton Simpson and Nadir Soofi of Phoenix were fatally shot by a police officer when they opened fire with assault rifles in a parking lot outside the cartoon exhibit and contest. An unarmed security guard suffered a minor wound.

Court documents showed Simpson had been under federal surveillance since 2006 and was convicted in 2011 of lying to FBI agents about his desire to join violent jihad in Somalia. “I believe that perhaps he might have just snapped when he heard about the cartoon contest,” Kristina Sitton, a Phoenix attorney who defended him in the case, told CNN. Sitton said Simpson had never shown any desire to join violent jihad.

Soofi was a popular student at an elite school in Pakistan but struggled to adjust to life after moving to the United States as a teen, friends said on Tuesday. Soofi’s story appeared to trace a familiar arc for some Western Islamists – disappointment, alienation, and a search for belonging that ended with the embrace of militancy.

The shooting in Garland, an ethnic melting pot in a city of about a quarter million people, was an echo of attacks or threats in other Western countries against images depicting the Prophet Mohammad. (Reuters)