A lot has been made of the hate and vitriol that the terrorist group ISIS/ISIL/Islamic State have for everyone (but themselves). They’ve been on a murderous rampage in parts of Syria and Iraq with ongoing dreams of spreading their brand of violent Islamic terrorism across the world either by export or by radicalizing natives in those countries. So what happens when you combine the scrounge of ISIS with the other big danger being covered in the news (Ebola)? Of course there is a convergence and we end up with reports that the Islamic State is looking to somehow use Ebola as a bio-terrorism weapon in the United States. They are not likely to get access to a weaponized version of Ebola which, if it ever existed, would have been limited to the Soviet Union and maybe other military powers during the cold war.

Could they take a large amount of infected (body) fluid and somehow get it on people? Sure but that would be very cumbersome and any such hypothetical attack would have a small footprint. Terrorists could figure out a way to either smuggle or through international travel, get Ebola infected comrades into the United States or Europe. Once there these infected jihadis could try to spread the disease from person to person by physical contact. This is hard as once in the stage where Ebola is alive in the carrier and spreadable, the disease will be ravaging the human carrier and assuming it is not aerosolized, would be hard to spread. The most likely victims would have been medical personnel but one can assume that they are now on guard for Ebola cases in general. But none of these details prevent terrorists from talking about it in Internet chat rooms (sic). 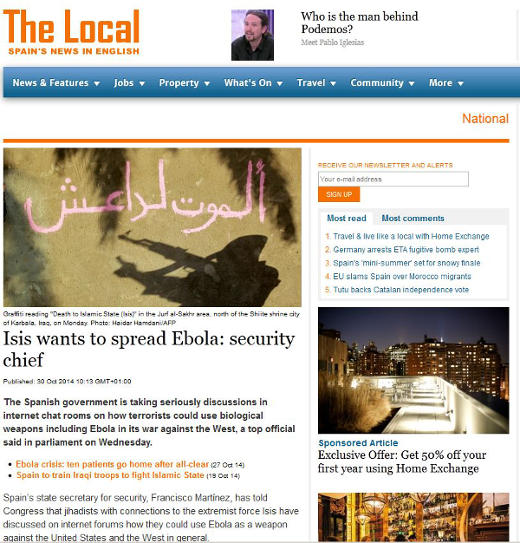 Could ISIS/ISIL terrorists spread Ebola to the United States?

According to Spain’s RTVE public broadcasting corporation, the interior ministry number two said there had been “many examples” of threats to use the Ebola virus and other toxins in a new form of terrorism offensive against the West, referring specifically to three recent cases.

Most recently there was the “jihadist chat room” conversation discovered in mid-September in which “the use of Ebola as a poisonous weapon against the United States” was discussed in a forum Martínez described as “linked to Isis”.

The security chief also mentioned a series of tweets from July in which, he said, the terrorist organization Ansar al-Islam was shown to be considering the use of “deadly chemical products from laboratories”. (The Local) 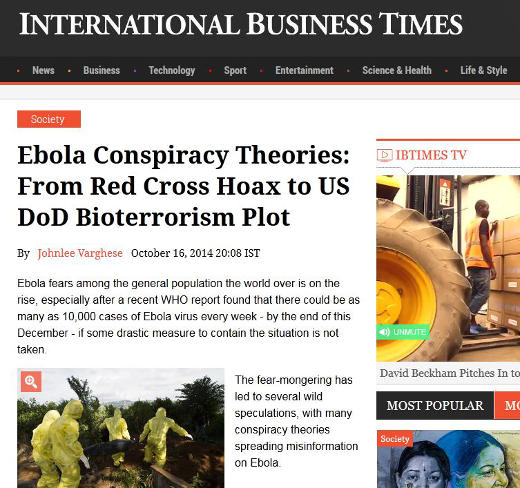