The 2016 American Presidential “sweepstakes” are already starting to take shape as the Democrat and Republican party candidates are starting to state their positions on domestic and foreign policy issues. Hilary Clinton is well on her way to be the Democrat party frontrunner but the Republicans are likely to have a few more in the running. Chief among them is former Florida Governor Jeb Bush. He was recently speaking to the the Ohio Chamber of Commerce’s annual meeting and told reporters that the current policy of isolationism with respect to Islamic terror has not worked. He believes that America needs to be more engaged and prepared for a longer term commitment – which may bring back memories of the regime of his brother, George W. Bush. 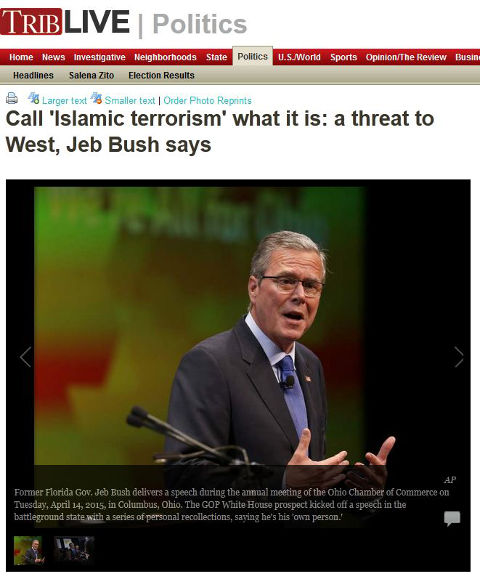 Under Obama, Bush said, America’s strategy is “to isolate and not be fully engaged, because of the fatigue Americans legitimately feel about long-term engagements, in the Middle East particularly.”

“One of the first things we have to do is to get back into the game and develop coalitions to take these terrorist groups out,” he said.

Turkey, Egypt, Jordan, Saudi Arabia and Persian Gulf countries “are hugely important” as U.S. allies, Bush said, “with Egypt being perhaps the most important relationship that we have fractured.”

The United States should make clear that “we are going to be their partner for the long haul and not going to cut-and-run,” he said. (TRIBLive)