Figuring out the cause(s) of something as complex as terrorism is no easy feat and is therefore still a work in progress. But that does not stop individuals and organizations from making a case for religion, culture, geopolitics, etc. as the underlying causes for (the increase in) terrorism. The Islamic State is the terrorism scrounge du jour, but terrorism in this world has a longer history – going further back than the September 11, 2001 attacks on the World Trade Center towers or other instances of radical Islamic terrorist acts from the decade before. It is much harder to nail down all the reasons for “What causes terrorism?” than many seem to think. 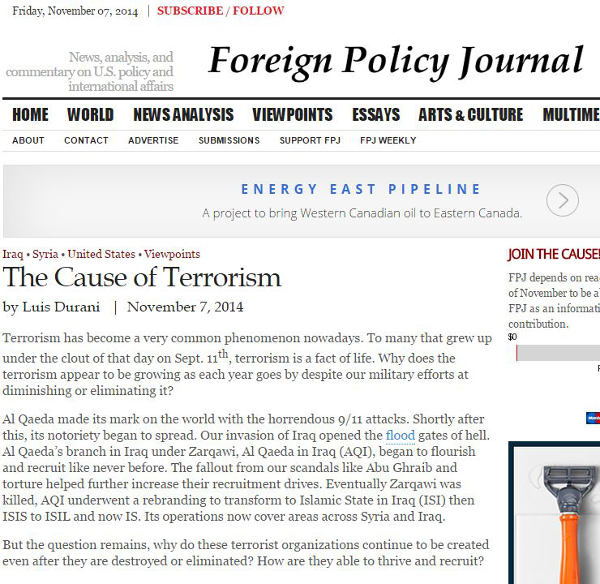 But the question remains, why do these terrorist organizations continue to be created even after they are destroyed or eliminated? How are they able to thrive and recruit?

In today’s media, many claim it is Islam and the religious doctrine while others claim it is Arabs or the political culture of the region that makes them more amicable with terrorism. The answer is not black or white. There are many motivations, circumstances and factors that take place to make someone take this road. But one of the main reasons were outlined by Congressman Ron Paul in a campaign stop once, “Intervention in the Middle East is the main motivation behind terrorist hostilities … Islam is not a threat to the nation.”1

But for those of us that lack any knowledge of history and continue to question why terrorism emanates from this region, we need to look at the region’s history for the past century. (Foreign Policy Journal)